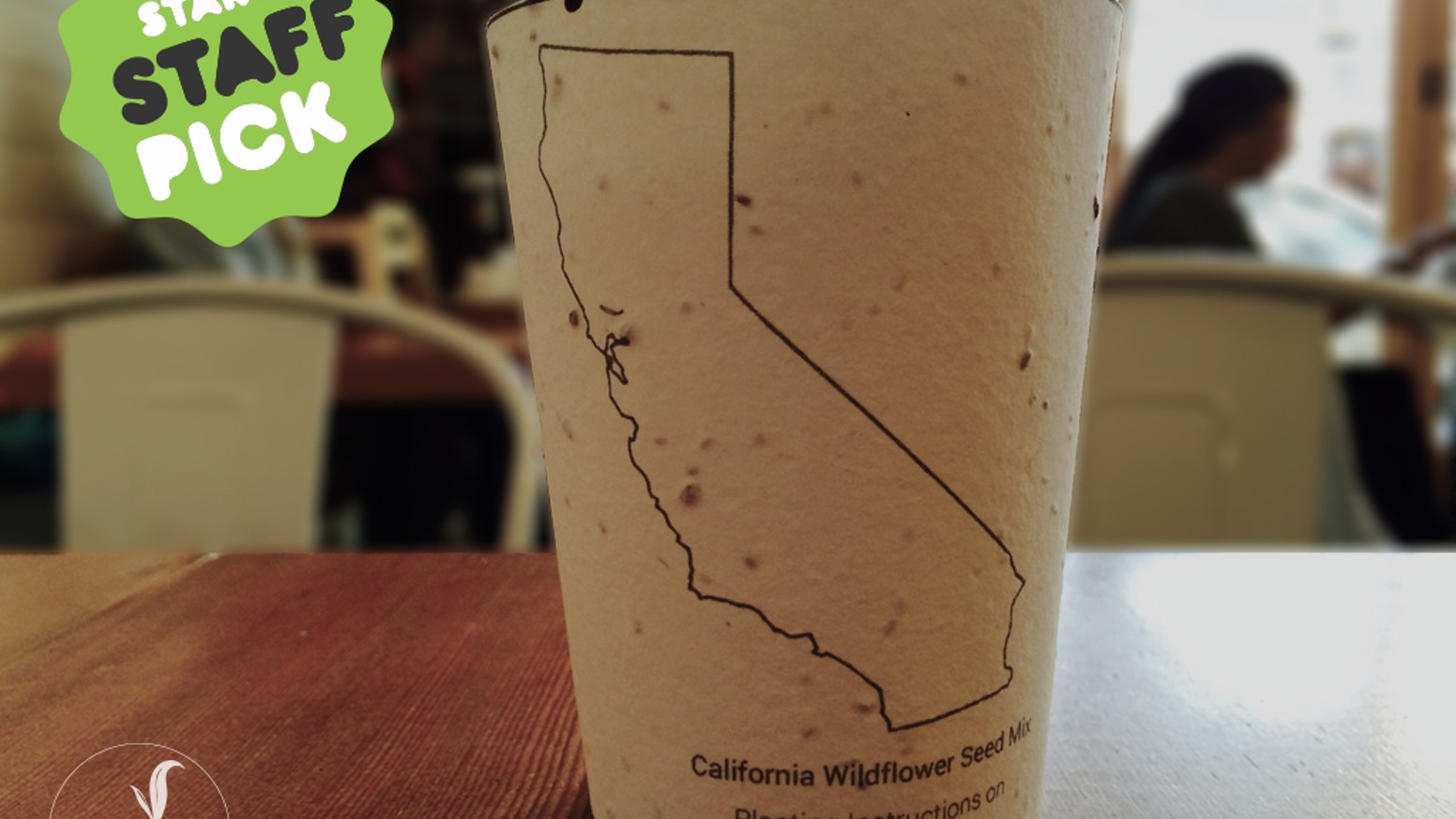 While visiting social media the other day, we came across a rather interesting resurgence of an old idea. Back in 2015, a company called Reduce. Reuse. Grow. came up with an idea and put it on Kickstarter. The idea was rather simple: rather than using petroleum based plastics for single-use items like coffee cups, if cups were made of PLA bioplastic instead, we could reduce the amount of plastic waste floating in oceans and ending up in landfills. Additionally, this company also wanted to embed wildflower and tree seeds into each cup, meaning the cup owner could bring the cup home, soak it in water, and then plant it where they wanted those seeds to grow. This idea of “seeds in cups” has made a recent resurgence on social media, and we wanted to give our take on it.

It is worth noting that the company’s site does not offer any further specifications on the “seed cup” or even offer it for sale at this time.

A good idea: In theory

At face value, this idea seems good and cute even. If you could take a plastic bottle and plant it in the ground to create something beautiful that helps the environment, why wouldn’t you? The Kickstarter gathered over $21,000 from supporters, but that number seems small for a successful Kickstarter, and it’s likely because of the “good idea: in theory only” that many people could see through the cutesy facade into the reality of our pollution problem.

Unfortunately, there’s just no way to know where trash will end up. People who discard trash out of car windows or on the side of the road often don’t care about where their refuse ends up. They simply don’t think about it. A plastic bottle can travel from the spot it was discarded on the side of the road into a stream, river, lake, ocean, or elsewhere. Someone doesn’t have to intentionally drive a cup hundreds of miles out of the way and discard it for it to end up somewhere far from where it was dumped.

The big problem here is the seeds embedded in the cups. While some states heavily value some of their wildflowers and trees, other states find they are invasive, noxious weeds that strangle out native vegetation. Seeds that are good for northern California might not be good for southern California, given the state is 1,040 miles long. Though indicators for where the cup should be planted exist on the printed area of the cup, there’s no guarantee that litter couldn’t end up in a place where those seeds can be invasive or downright illegal.

Add these cups to areas such as homeowner’s landscapes, town forests, or other areas that aren’t readily maintained, and a small, cute idea can develop into a big headache for a lot of people.

PLA bioplastics could shift the blame

One of the biggest benefits for this particular seed cup is that it’s made of PLA (Polylactic Acid) bioplastic. What’s great about PLA bioplastic is it generally doesn’t take very long to decompose. This particular cup is made of a cornstarch based PLA bioplastic, which can decompose in 3-6 months, versus the 450 years it takes a traditional plastic cup or bottle to decompose. While this sounds great, and obviously we’d want less plastics in our oceans and landfills, we also want to take a look at a few points.

No details were given in the Kickstarter about the particular mixture of material, but the company said they were cornstarch based. Many companies tout “bioplastic” if the material is made of less than 60% petroleum. The end result is a longer lasting product, but only serves to reduce reliance on petroleum based products. Details are not given on the cup itself, just that the paper-based seed labels will break down in “180 days”. The company’s website states their cup liners are made from “corn, sugarcane and sugarbeets. Never Petroleum” but does not give any further details.

In a study conducted in 2010, researchers found that bioplastic causes more pollutants to be created during its lifecycle, given it comes from plants; fertilizers, pesticides, and other chemicals need to be taken into consideration when determining if bioplastic is a viable solution.

The US already relies too heavily on corn

Assuming we could get all corporations on board with using PLA for coffee cups, we would be shifting a heavy reliance on petroleum based plastic instead to crops, and in this instance, it would be corn. Farmers already struggle with nutrient-drained crop plots, especially in the instance of corn. Finding places with nutrient-rich soil that haven’t already been used would require discovering new areas, which often leads to rampant deforestation. Are we ready to shift from petroleum to a heavier demand on corn? Are our farmers?

Stocking PLA bioplastic could be a nightmare

If PLA bioplastic like this is expected to only have a shelf life of 3-6 months, then creating and stocking enough of it to fill demand without having much left over will be difficult. Corporations often purchase large stock of items and house them for long periods of time. PLA bioplastic would need to be considered a “perishable” item, which may cause some businesses not ready to throw away unused cups money. These businesses will have to consider what they will do with cups that are past their “expiration”.

All too often consumers are blamed for their inability to properly dispose of or recycle their end products. However, shouldn’t the corporations who are forcing us into single-use plastics also share the blame and responsibility of ensuring a healthy and happy environment? Rather than pointing the finger and simply shifting the material to something that could be slightly less harmful, corporations and manufacturers should be considering making real changes that will actually change the consumer’s habits.

Taking single use plastics out of the equation is one of them. Instead, offering customers the ability to bring a reusable travel mug to a coffee shop might be a better option, and offering customers incentives to “BYO” could be a great starting point.

There is no one single solution that will stop pollutants from entering our precious environment and causing harm to our wildlife and ecosystems, but we need to start considering big changes to help keep our Earth beautiful and clean.